On Rossini, and his encounters with Beethoven and Chopin... 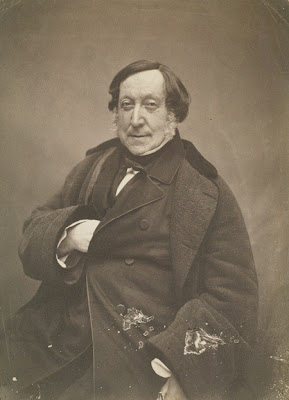 Today we get to celebrate something we don't often have the chance to: Gioachino Rossini's birthday, born February 29 1792. Rossini had an extraordinary career. During his lifetime he was the most famous opera composer of them all, his heyday being the 1820s. Rossini took early retirement from the operatic world in 1829 at the age of 37, and spent the latter half of his life in both France and Italy.

In April 1822, while visiting Vienna at the height of his fame, Rossini had the opportunity of meeting Beethoven. Rossini was profoundly moved by this encounter and by the impoverished conditions in which the composer was living, which he vividly described: "Ascending the stairs that led to the miserable dwelling which the great man inhabited, it was certainly hard work to control my emotion. When the door was opened, I found myself in a kind of dirty and frightfully disorderly attic. I remember above all that the ceiling, immediately under the roof, was covered from great cracks through which the rain must have poured in. The portraits of Beethoven which we all know entirely reproduce his appearance faithfully enough. But something that none have ever known how to express is the indefinable sadness that emanates from his face, while under the thick eyebrows, in deep caverns, the eyes, though small, seemed transfixed. His voice was sweet and a little veiled." Beethoven (already profoundly deaf) then said (translated from German by Rossini's companion): “Ah, Rossini. So you’re the composer of The Barber of Seville. I congratulate you." (The Barber of Seville was at that time a good deal more succesful than Beethoven's own opera Fidelio!). At other times Beethoven had not been so complimentary about Rossini, writing in one conversation book (in 1825): "This rascal Rossini, who is not respected by a single master of his art!" and in another: "Rossini! If Dame Fortune had not given him a pretty talent and amiable melodies by the bushel, what he learned at school would have brought him nothing but potatoes for his big belly."

Several years later Rossini, now retired and living in Paris, met the composer Chopin. Chopin had grown up with Rossini's operas in Warsaw, where they were all the rage in the 1820s. In 1830 Chopin specifically mentions the aria 'Giusto Ciel' when the woman with whom he was madly in love at the time, Konstancja Gładkowska, interpolated it into a performance of the opera La Gazza Ladra (The Thieving Magpie).

After his move to Paris Chopin heard many of the world's leading singers, including La Malibran, Lablache and Rubini, in Rossini's operas; Chopin's letters are filled with references to such operas as L'Italiana in Algeri, La Cenerentola, Mosè, Semiramide, Le Comte Ory, Il Turco in Italia, Guillaume Tell, La Gazza Ladra, Maometto II, La Donna del Lago, Il Barbiere di Siviglia, Otello, etc.. After Chopin's death, in October 1849, his close friend Wojciech Grzymała movingly described the scene at Chopin's deathbed: "A few hours before he died he [Chopin] asked Mme Potocka to sing three airs by Bellini and Rossini. These she sang, accompanying herself and sobbing, while he listened to them with sobs, and deep emotion, as the last sounds he would hear in this world".

In Rossini's long years of retirement he still composed a little, including the beautiful Petite Messe Solennelle in 1863, written 34 years after his 'retirement' as an operatic composer. With typical humour Rossini wrote on its completion: "Dear Lord – this poor little Mass is finished, Here it is. Have I written sacred music or desecrated music? I was born for opera buffa, as Thou well knowest. A little knowledge, a little heart; that is all. Be therefore blessed and grant me heaven." Of course Rossini was also going directly against Beethoven's advice, who also said to Rossini at their 1822 meeting: "Never try to write anything else but opera buffa [comic opera]; any other style would do violence to your nature."

Rossini's later years were also famous for the musical soirées he held at his Paris home at which he also demonstrated his famous culinary skills, his sharp wit, and his fondness for his pets, including his dog Nini and his parrot Peruche (Peruche's death was commemorated by Charles-Valentin Alkan's witty Rossini parady 'Marcia funèbre, sulla morte d'un Pappagallo' - sometimes translated as 'Funeral March for a Dead Parrot'!).

Rossini died in France in 1868. In his 76 years he had witnessed an extraordinary period in the history of music: born the year after Mozart's death he had outlived not only Beethoven but many composers younger than himself including Schubert and Chopin. It seems extraordinary to think that in 1822 he was still close enough to Mozart's era for Beethoven to specifically ask if Mozart's operas were still being sung in Italy, while the year of Rossini's death saw the first performance of Brahms' Requiem and the first compositions of a 9-year-old Elgar, whose godson I have actually met! Rossini also lived into the era of photography, and there are several fine photographic portraits of the composer, which make fascinating comparison with the many oil paintings done of him before the invention of photography. One thing all the photographic portraits of Rossini reveal is what Beethoven sarcastically described as Rossini’s "big belly"! 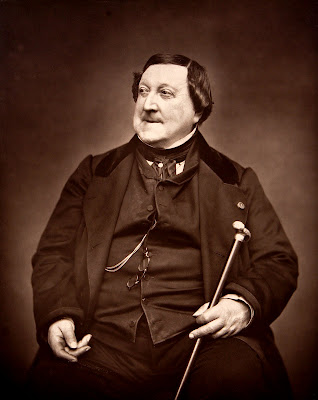 Posted by Jack Gibbons at 3:45 PM No comments: