Wolfgang Amadé Mozart was born this day, 27 January, 257 years ago. His incomparable music continues to inspire long after his short (and largely unappreciated) life ended.

Just over 231 years ago Mozart and Josepha von Auernhammer gave the first performance of Mozart's Sonata for 2 pianos K.448 in Vienna. In 1993 two less intelligent people at the University of California conducted an experiment that concluded that listening to this piece for 10 minutes was better for the brain than listening to a piece of rubbish, or nothing, for 10 minutes - duh! (and so began the craze for making babies listen to Mozart!). So go ahead, listen, and improve your IQ right now. And read on for a little bit more fun...


[Mozart Sonata for two pianos K.448 (1st movement
played by Vladimir Ashkenazy and Malcolm Frager,
written and first performed in 1781 (1964 recording)]
... below is Mozart's highly unflattering portrait of Josepha von Auernhammer (who apparently had a huge crush on the 25 year old Mozart):

22 August, 1781
Vienna
Dear Friend
You may be surprised to know that I am getting married! Well let me tell you - when I walk down the street and hear this news - so am I! It seems that once again gossip is spreading across town. This time that I am to be married to one of my pupils - do you recall my student Fraulein Auernhammer? - and everywhere people are asking why would he take someone with a face like hers? Truly this is no idle comment... Michelangelo himself would have used her face as a model to portray the visage of hell in his Last Judgement! She is as fat as a farm pig and perspires so readily that it makes one quite sick to think about. To make matters worse, she dresses so scantily as to say plainly "look right here". True, there is plenty to see - but who would want to look! The sight is enough to strike one blind! One is truly punished if they let their eye wander! Let me assure you that there is no truth in the rumour - though it seems that the poor girl has fallen in love, longing, lust with me, and impresses herself on me at every occasion in an attempt to be attractive! She hogs my day and makes me squeeze next to her at the piano going over some tedious fingering. When I confronted her about these rumours she denied it with a laugh - but I know for a fact that she herself is responsible for spreading them. And I have it from a reliable source that she has even embellished our post wedding plans!!!!! Eventually I got mad at her and thus had to endure her tender reproaches. What is a poor composer to do? Though she has much promise as a pianist I will not be taken advantage of and I have resolved to see her less and less - so hopefully this thing will eventually die. All this after I have dedicated to her a set of sonatas and had Papa send from Salzburg some of my piano duets for us to play (though only ones written for 2 pianos for sure we could not play together on one!). Now I must rest. Relaying my trials exhausts me as much as if I had to endure them again in the flesh. Pray for me that I am not beset by nightmares. Good night dear friend - 1000 wishes to you and your family.
W. Mozart
Posted by Jack Gibbons at 4:03 PM No comments:

January: Welcomed in 2012 with a performance of Rhapsody in Blue with the last chord of the work being struck on the first stroke of midnight at the beginning of the new year (thanks to friends in Ireland who first persuaded me to do this fun stunt many moons ago).


Immerse the dream.
Drench the kiss.
Dip the song in the stream. 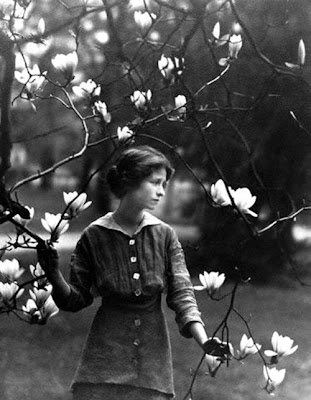 [Edna St Vincent Millay, Vassar College 1914,
photo by Arnold Genthe]
March: Attempting to justify reaching the milestone age of 50 on March 2, I turned down all invitations to celebrate and instead spent a week in self-imposed isolation in order to complete this piece.


[Gibbons: Nocturne in B flat minor, Op.93,
completed 13 March 2012]
April: With a feeling of spring in the air this piano duet (with its deliberately easier top part for younger piano students) was finished in the early hours of the first day of the month.


[Beethoven: Moonlight sonata, opening movement, Adagio sostenuto, played by Jack Gibbons, recorded live, Oxford, England, 15 July 2007]
June: A visit to America's historic triangle (Jamestowne, Williamsburg and Yorktown), as well as Monticello, inspired me to become immersed in American history, find out a little more about the authentic music of that momentous period, and enjoy a rare opportunity to escape the bustle and 'noise pollution' of the 21st century.


[Debussy: Prelude 'La cathédrale engloutie', played by Jack Gibbons, recorded live, Oxford, England, 22 August 2012.]
September: Performed on Gershwin's birthday, September 26, at the Lincoln Center, Washington DC, on behalf of Davis & Elkins College, including in the concert the world premiere of my transcription of this recently discovered Gershwin performance recorded in 1934.


[Gershwin plays My Cousin in Milwaukee: rare recording, recently discovered and preserved by Peter Mintun, of Gershwin's April 9 1934 'Music by Gershwin' radio broadcast, recorded off the air thanks to jazz harpist Casper Reardon, who appears with Gershwin in this broadcast.]
October: Discovered this recording of Brahms playing Josef Strauss's Polka-Mazurka 'Die Libelle' ('The Dragonfly'). On 2 December 1889 Brahms recorded two pieces on an Edison cylinder: a short version of his Hungarian Dance no.1 and an extract from Josef Strauss's Polka-Mazurka 'Die Libelle' Op.204. The voices of both Brahms and the engineer, Theo Wangeman, can be heard at the beginning of these remarkable historic recordings (as later documented by the son of Dr Fellinger, at whose Viennese house the recording session took place). The following video contains 4 versions of each piece of music, to help decipher the sound on what are now extremely deteriorated, though remarkable, recordings.


[An audio aid to deciphering the famous 1889 Brahms recordings.]
November: Just a few days after the devastation of Hurricane Sandy I came across this unpublished recording from my archives of the soprano Ann Mackay singing one of my songs composed in 2002 to words by Christina Rossetti.


[Gibbons: 'Oh What Comes Over The Sea', Op.32, composed in 2002, sung by Ann Mackay, accompanied by the composer, recorded London, November 2003.]
December: First performance of my new Romance, Op.96, written as a thank you gift for Davis & Elkins College, where I am artist-in-residence. The music in the following video is accompanied by a slide show of beautiful photographs of Derbyshire, England from the excellent blog Uphilldowndale