On 4 August 1782 Mozart married Constanze Weber, despite serious opposition to the union from his father. On 3 April 1783 Mozart wrote to his father Leopold:

"The two portraits will follow; – I only wish that you will be pleased with them. I think they are both good likenesses and all who have seen them are of the same opinion." 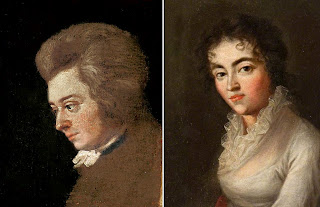 [The portraits of Mozart and his new wife Constanze, which Mozart likely sent to his father in the spring of 1783. They were painted by Joseph Lange, the husband of Constanze's sister Aloysia, in late 1782 or early 1783. Both portraits were later expanded, though the Mozart expanded version was never finished.]
On 17 June 1783 the Mozarts' first child Raimund Leopold was born. Mozart wrote to this father:

“Congratulations, you are a grandpapa! Yesterday, the 17th, in the morning at 6:30 my dear wife successfully gave birth to a large, strong and round-as-a-ball baby boy.”

“The child is quite cheerful and healthy, and has a dreadful amount of business, which consists of drinking, sleeping, crying, peeing, pooping, dribbling, etc.”

“Raimundl looks so much like me that all people say the same; it is as if he were cut from my face, which gives my dear wife the greatest pleasure, since this is what she had always wished. Next Tuesday he will be three weeks old, and he has grown a surprising amount"

Following pressure from Mozart's father (who had yet to meet Constanze) the Mozarts travelled from Vienna to Salzburg at the end of July 1783, leaving their precious baby in the charge of a foster-nurse.

Earlier, in a letter to his father written on 4 January 1783, Mozart had mentioned a promise to write a mass to be performed on the first visit the newly weds would make to Salzburg. Constanze gave more specific details of this promise when she met Vincent Novello during his visit to Mozart's widow in 1829. Apparently, Mozart initially intended the work to be a votive mass for the safe delivery of their first baby. Novello carefully recorded Constanze's description in his diary:

"The 'Davidde penitente', [K.469] originally a grand Mass [K.427] which he wrote in consequence of a vow that he had made to do so, on her safe recovery after the birth of their first child — relative to whom he had been particularly anxious. This Mass was performed in the Cathedral at Salzburg and Madame Mozart herself sang all the principal solos. Mozart thought so highly of this production that he afterwards made several additions and adapted new words to make it a complete Cantata, or rather Oratorio, for the former is too modest a title for so elevated, elaborate and masterly a work."

The writing of the original Mass came to an abrupt end in 1783, and the reason for this is obvious. While in Salzburg Wolfgang and Constanze would have received the tragic news from Vienna that their baby Raimund had died on 19 August 1783, at the age of just 2 months. Correspondence from this period is missing or non-existent, but a few months later, on 10 December 1783, there is a note from Mozart, now back in Vienna, to his father in Salzburg, in which he writes: “Regarding our poor, big, fat, dear little boy we are both really suffering.”

On the eve of their return to Vienna, at the conclusion of their fated Salzburg visit, the grieving Wolfgang and Constanze took part in the long promised performance of the incomplete Mass in C minor K.427, on 26 October 1783 at Salzburg's St Peter's Abbey. It must have taken Constanze all the strength she had to sing this music in such circumstances, music written so specifially for the safe delivery of their first child, including the heart-breakingly beautiful aria Et incarnatus est. A finer work of art inspired by love could not be conceived. Mozart's devotion to his wife fills his correspondence to her. In July 1791, when Constanze was ill during her sixth pregnancy and on a rest cure in Baden, Mozart wrote to her from Vienna: "you cannot imagine how slowly time goes when you are not with me. There is a sense of emptiness, which hurts, a certain longing which cannot be satisfied. When I remember how childishly merry we were in Baden [in June 1791 Mozart visited Constanze in Baden, and while there wrote his Ave Verum Corpus], and what mournful, tedious hours I pass here, my work gives me no pleasure because it is not possible as was my want to chat a few words with you when stopping for a moment. If I go to the clavier and sing something from the opera [the Magic Flute, on which he was working] I must stop at once because of my emotions". Ten years earlier, in December 1781, writing to his father, Mozart justified his reasons for wanting to marry Constanze in the simplest terms: "She has the kindest heart in the world. I love her and she loves me with all her heart."

On 24 August 1788, six years into their marriage, the Mozarts were visited by the Danish musician Joachim Daniel Preisler, who wrote afterwards:

"There I had the happiest hour of music that has ever fallen to my lot. This small man and great master twice extemporized on a pedal pianoforte, so wonderfully! so wonderfully! that I quite lost myself. He intertwined the most difficult passages with the most lovely themes. His wife cut quillpens for the copyist, a pupil composed, a little boy aged four [presumably the Mozarts' son Carl Thomas] walked about in the garden and sang recitatives — in short, everything that surrounded this splendid man was musical!"

The video below features the wonderful American soprano Arleen Augér singing the Et incarnatus est Mozart specifically wrote for his wife Constanze to sing as part of the C minor Mass. Arleen Augér was an incomparable interpreter of Mozart who enjoyed a brilliant career in Europe, though her home country of the United States was slow to wake up to her remarkable talent. In this beautiful live performance (filmed in Germany in 1990 under the direction of Humphrey Burton) Augér's singing is so sublime it actually moves her conductor, Leonard Bernstein, to tears after her last note is sung. The video is particularly poignant for other reasons too: a year after this performance Arleen Augér developed the symptoms of a brain tumour to which she eventually succumbed in 1993, dying at the age of just 53 [1993 was a sad year for sopranos as we also lost the wonderful Lucia Popp, also from a brain tumour, and at almost the same age as Augér]. This video is also a recording of one of Leonard Bernstein's last performances, the conductor and composer dying 6 months later, in October 1990, at the age of 72. Above all, it's a sobering thought to think that the creator of this sublime music died before even reaching his 36th birthday. If there's a lesson here it's that we should cherish every moment, and celebrate the fact that all these remarkable people live on in our hearts long after they no longer walk on this earth.


[Mozart's Et incarnatus est from the Credo of his Mass In C Minor, K.427, sung by Arleen Auger (soprano) with the Bavarian Radio Symphony Orchestra conducted by Leonard Bernstein, recorded live at the Abbey Church of Waldsassen, Germany, in April 1990.]
Posted by Jack Gibbons at 5:39 AM No comments: