In honor of Elijah Lovejoy

"The man who, with nothing to gain but the approval of conscience, and everything to lose but honor, stands forth against overwhelming odds in defense of a great and precious principle, and finally lays down his life in that defense, surely deserves from his fellow-men, at least, grateful and everlasting remembrance." Thomas Dimmock, Lovejoy – Hero and Martyr, New England Magazine, May 1891

"But, gentlemen, as long as I am an American citizen, and as long as American blood runs in these veins, I shall hold myself at liberty to speak, to write, to publish whatever I please on any subject--being amenable to the laws of my country for the same." Elijah Lovejoy

"I have sworn eternal opposition to slavery, and by the blessing of God, I will never go back." Elijah Lovejoy

On November 4th 2008 history was made in America with the election of Barack Obama as the 44th President of the United States, the first African American President of the United States. If you happen to live close to Alton Illinois, just east of St Louis on the Mississippi River, I can think of no finer a way of celebrating this historic win than to place a bouquet of flowers on the grave of one Elijah Lovejoy at the Alton cemetery.

Who was Elijah Lovejoy? 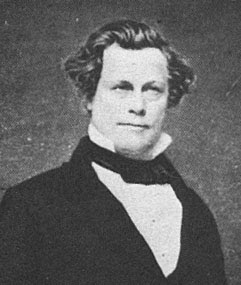 Elijah Lovejoy was one of many thousands of brave men and women who stood by his principles and attempted to make a difference in the long and difficult struggle for social justice and equality in the U.S.. Elijah Lovejoy was killed by an angry pro-slavery mob on this day, November 7th, in the year 1837, for no other reason than because he opposed the evil of slavery and was bold enough to promote the abolition cause through his newspaper the Saint Louis Observer. Lovejoy had showed tremendous defiance in the face of constant threats and danger and his death had a profound effect on both freedom of speech and the abolition movement.

Lovejoy was born on November 8, 1802, in Albion, Maine. After graduating with first class honors from Waterville College (now Colby College) in Waterville, Maine in 1826 he decided to seek a living in the Midwest as a school teacher. With no funds of his own he apparently walked much of the distance from his native Maine to St Louis, finally arriving in the city of St Louis where he founded his own private high school. He also became interested in journalism and by 1830 had become editor and part-owner of the St. Louis Times. However, in 1832 Lovejoy decided to head back east to enroll in the Princeton Theological Seminary in New Jersey.

In 1834, now an ordained Presbyterian preacher, Lovejoy was persuaded by a group St Louis businessmen to return to St Louis to edit a newspaper with a strong moral slant, the St. Louis Observer. In his editorials Lovejoy advocated freedom of the press, freedom of speech, and freedom from slavery. Lovejoy’s editorials became increasingly radical and began to incense the pro-slavery lobby within Missouri (which was then a slave state), as well as the Missouri Senator and slave owner Thomas Hart Benton. In May 1836, Lovejoy was run out of town by his opponents after he chastised Judge Luke E. Lawless, who had chosen not to charge individuals linked to a mob murder of a free black man Francis J. McIntosh, who had been horrifically burned to death while tied to a tree. Judge Lawless even tried to switch the blame to Lovejoy’s newspaper in his summing up, as he held up a copy of the St Louis Observer and said: "It seems to me impossible that while such language is used and published as that which I have cited from the St. Louis Observer, there can be any safety in a slave-holding state". There is no question that Judge Lawless’s inflammatory language led directly to the tragedy of Lovejoy’s death.

As mob violence increased over the issue, Lovejoy, together with his family, decided to move across the Mississippi River to Alton, in the free state of Illinois, and he continued to print his newspaper, now under the name the Alton Observer. Mobs had destroyed Lovejoy's printing presses on three previous occasions, but undeterred Lovejoy had ordered new presses which were secretly delivered to the press’s new location in Alton in the early hours of November 7th 1837. 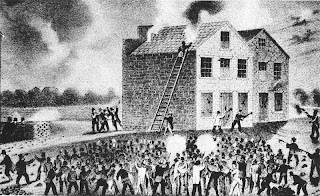 By 10 p.m. the same day, November 7th 1837, a pro-slavery mob had gathered outside the newspaper building in Alton, having heard about the secret delivery of new printing presses. The violence escalated, shots were fired by the mob and in the return fire a member of the mob was killed. Ignoring requests by the mayor of Alton to disperse, the mob then began setting fire to the newspaper building. Lovejoy and his colleagues, still inside, stood their ground. Then when Lovejoy emerged from a doorway at one point, attempting to repel another arson attack, he was shot five times.

He died in the arms of his friend Thaddeus Hurlbut only a few moments later. Even as he lay dead the mob stormed the newspaper building and began demolishing the printing press around him.

Elijah Lovejoy was buried on his 35th birthday, November 8, 1837, in an unmarked grave in the Alton City Cemetery, the location known by an African American, William "Scotch" Johnston, who assisted in the burial. Members of the mob from the night before, feeling no shame for their actions, laughed and jeered as the funeral wagon moved slowly down the street toward Lovejoy's home.

Years later, through the generosity of Thomas Dimmock, Lovejoy's body was exhumed and reinterred at the present site. Dimmock purchased New England granite for the grave and had inscribed on the marble scroll over the tomb the Latin words which translate: "Here lies Lovejoy - Spare him now the grave"

Following Lovejoy's death membership of anti-slavery societies increased sharply in northern states. Yet in Illinois the silence from government officials was deafening, with one exception: a twenty-eight year old State Representative by the name of Abraham Lincoln spoke at an address before the Young Men’s Lyceum in Springfield Illinois a few weeks later, on January 27th 1838:

"The innocent, those who have ever set their faces against violations of law in every shape, alike with the guilty, fall victims to the ravages of mob law… Let every man remember that to violate the law, is to trample on the blood of his father, and to tear the charter of his own, and his children's liberty … There is no grievance that is a fit object of redress by mob law."(Abraham Lincoln, Address before the Young Men's Lyceum, Springfield Illinois, January 27 1838)

Through the tragedy of his death on November 7th 1837 Elijah Lovejoy came to be seen as the first martyr of the abolition movement. As a consequence, the Thirteenth Amendment of the U.S. Constitution of 1865 (banning slavery in the United States) was drafted in Alton. 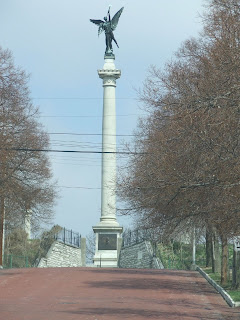 So if you happen to live near Alton Illinois, on the banks of the mighty Mississippi, not far outside of St Louis on the Illinois side, perhaps you could take some flowers to Aston’s city cemetery where Elijah Lovejoy is buried, and where a modest monument was erected in his memory by local citizens in the late 1890s, and lay them on his tomb (perhaps even today, the anniversary of his death, or tomorrow the anniversary of his birth) in silent recognition of his selfless contribution to a cause that on November 4th 2008 reached fruition in the election of the first African American President of the United States. Truly Elijah Lovejoy did not die in vain, nor the countless others, known and unknown, who gave their lives in pursuit of justice and freedom. America’s history is filled with darkness as much as light, but even in the years of greatest darkness individuals such as Harriet Tubman, Martin Luther King Jnr. and Elijah Lovejoy have shown the true spirit of the nation. 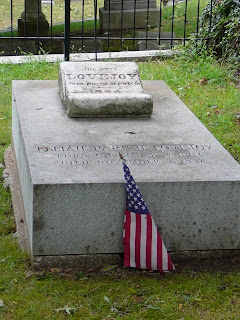 An account of Lovejoy’s death by the Alton Observer

Information on Elijah Lovejoy from the Illinois State Historical Library

A blog that also mentions a visit to the Lovejoy grave