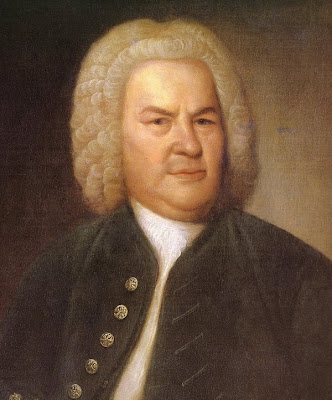 When posting my 6 previous blogs 'in praise of Bach' I was struck yet again by the frequency of over-the-top phrases spoken through history in praise of the music of this one man:

"one of the most influential works in the history of western classical music"
"a pinnacle of the solo violin repertoire"
"one of the greatest achievements of any man in history"
"one of the most important examples of variation form in music"
"there are many great composers, and then there is J. S. Bach"
"Bach pierces to the heart like no other"
"the greatest artwork of all times and all people"
"some music is so good it needs no introduction"

How can one describe Bach to those who don't know his work? His position in the music world is easy to describe: Bach is frequently compared to Shakespeare in literature. Isaac Newton in science, Michelangelo in art [see the foot of this blog for a recording of one of Bach's most moving choruses (from the St. John passion) combined with a slide show of Michelangelo's incomparable Pietàs]. Revered by all the greatest composers that came after him, even music critics whose daily published opinions reveal their ignorance feel obliged to genuflect in front of Johann Sebastian (if only out of peer pressure). Bach's position in musical history is unassailable, unarguable. I remember, when I was too young to appreciate just who Bach was, a teacher at my school being asked who they thought was the greatest composer of all. A ridiculous question needless to say, but the teacher's answer was immediate: "Bach of course". As a small child I didn't forget that answer because of the confidence of the teacher's response. But how is it that one man could have been so gifted, had so much wisdom and sense of humanity - that's much harder to explain. Listening to the inferior quality of the music written by his own children (some of whom became more famous than their father as composers during their lifetimes) or the poverty of the music by the long line of Bach ancestors who came before him (music was a family business for the Bach's stretching back centuries) doesn't strengthen the argument that it can all be explained by genetics. The composer Walton once quipped that you have to have something truly appalling happen to you in order to write music. Certainly Bach's personal life story is filled with sad events that surely must have deeply affected him: the loss of 11 of his children and the unexpected death, in his absence, of his youthful first wife Maria Barbara. But not every one who has suffered similar tragedies starts writing the most beautiful music of all time. If I could travel in time I would so love to go back 300 years to meet Johann Sebastian - just glimpsing him walking out of his building and perhaps through the neighbouring 'Little Thomas Gate" would leave me in a state of euphoria, let alone hearing him speak, watching him conduct, or best of all being a fly on the wall in his Componierstube (his Composing Study, from where he had views over ornamental gardens and the surrounding countryside) when he was creating his immortal masterpieces! To others who don't understand my passion this might seem as exciting as watching paint dry. To me it's the meaning of life!

Sadly there is only one authenticated picture of the composer (painted in 1746, see above), and one that really doesn't give much away (apart from the bags under his eyes that clearly show a lack of sleep). The description of Bach left by its painter, Elias Gottlob Haussmann, writing of how Bach was in a tremendous hurry and did not want to sit too long for the portrait, says more about Bach than the portrait itself. But there are other written descriptions of Bach that help to shape a clearer portrait of the man, from his children and from his friends, all of whom describe his wonderful humanity, his love for his family, his gregariousness (his son said his house was like a beehive so constantly filled with visitors, and that his presence was always "edifying"), his kindness to those he taught (one pupil writing that he could not adequately describe his excitement when the hands of the composer overlapped with his when being shown a passage on the keyboard), Bach's sense of fun (digging his son in the ribs when listening to a new composer's music and suggesting in a whisper what the piece should do next if the composer was any good), Bach's down-to-earthness (telling someone that his success was due to his industriousness, something anyone else who worked as hard could also achieve). Bach was a stubborn man too, someone who had little patience with unreasoning authority - this attitude frequently got him into trouble from the ignorant and petty-minded officials who had authority over him, and who probably wanted more than anything to take him down a peg or two. Yet for all those ignoramuses there were just as many kind, intelligent and thoughtful friends who loved and appreciated Bach. One ex-pupil recalled years after Bach's death how he had a portrait of Bach on the wall in his house, and how a friend called by and, on seeing the portrait, said words to the effect of "that old bore Bach", this distressing Bach's ex-pupil so much that ever afterwards he always hung the picture facing the wall to prevent anyone else saying an unkind word about a man he clearly adored and of whom he had nothing but the fondest memories.

Perhaps the last words of this short eulogy to J.S. Bach should be left to Johannes Brahms, a man not known for giving empty praise, who wrote the following words to Clara Schumann describing Bach's Chaconne for solo violin: "On one stave, for a small instrument, the man writes a whole world of the deepest thoughts and most powerful feelings. If I imagined that I could have created, even conceived the piece, I am quite certain that the excess of excitement and earth-shattering experience would have driven me out of my mind".

Michelangelo was in his early twenties when he completed his most famous Pietà of St Peter's Rome. According to legend he overheard someone praising the work as by another artist so returned to the sculpture and carved his name on it - the only work of his on which he carved his name.

Michelangelo began the Florentine Pietà (also known as 'The Deposition') in his 70s and was originally intending it for his own tomb. Unfortunately the marble he used was faulty, unknown to Michelangelo when he began the sculpture, and it often drew off sparks as he worked. Finally the left leg of Christ broke off while he was working on it. Michelangelo was so furious he attempted to destroy the whole sculpture, beginning with Christ's left forearm and hand and right forearm, but was prevented by his pupils from completing the destruction. It was later repaired and completed by his pupil Tiberio Calcagni - the inferior quality of Tiberio's work is obvious in the finishing of the figure of Mary Magdalene; fortunately Tiberio Calcagni didn't attempt to 'finish' the remaining figures. The tall figure of Joseph of Arimathea (also credited as Nicodemus) is according to legend supposedly a self portrait of Michelangelo himself.

The unfinished Palestrina Pietà has no documented history in Michelangelo's lifetime. However it was added to the Michelangelo collection in Florence in 1939. Most likely Michelangelo began the work, and possibly one or more of his pupils attempted more work on it, though it remained incomplete.

Michelangelo was apparently working on his last Pietà, the unfinished Rondanini Pietà, only days before he died in 1564, at the age of 89.

Before his death Michelangelo attempted to have all his drawings burnt, regarding them as inferior work, drawn purely for the purpose of preparation for his sculptures and paintings. Fortunately for us Michelangelo was unable to complete the destruction and many of his beautiful drawings (many done in red chalk) have survived.
Posted by Jack Gibbons at 1:47 PM