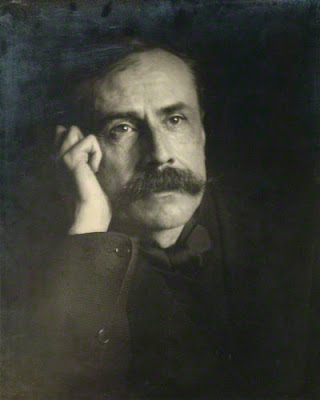 [Edward Elgar (1857-1934) photographed by Charles Grindrod in 1903, the year of the first sketches of the 2nd Symphony.]
The Symphony no.2 Op.63 of Edward Elgar, completed on 28 February 1911, is one of his of greatest works. To his close friend Alice Stuart-Wortley (nicknamed 'Windflower' in his correspondence) Elgar wrote: "I have written out my soul in the concerto, Symphony No. 2 and the Ode and you know it ... in these three works I have shewn myself". At the heart of the 2nd symphony is an epic slow movement, sometimes described as a funeral march, a deeply moving piece filled with so many amazing moments too numerous to mention in this short post. Like the whole symphony it's a piece of music that repays constant relistening. In today's world of short sound bites I worry about people's ability to appreciate and enjoy something of this length and complexity, though the music and emotion is so direct and heartfelt I would be amazed if after a few listenings anyone new to this work was not drawn in to Elgar's wonderful world. The form of the movement is fairly straightforward, a kind of sonata form where the 'march' forms the main theme and a more lyrical and impassioned melody forms the second big theme and which leads to two big climaxes, the second even bigger than the first. In between these themes there are many magical episodes. The return of the funeral march (before the movement reaches it's second big climax) is hauntingly transformed by a meandering solo oboe lament played above the march (at 7:26 in the video below) with a pulsating string accompaniment. In the video Elgar's work receives a truly inspired performance from the the Hallé Orchestra conducted by Sir John Barbirolli (recorded in 1964).

[The slow movement (Larghetto) from Elgar's Symphony no.2 Op.63, with the Hallé Orchestra conducted by Sir John Barbirolli (recorded 1964) with rare video of Elgar conducting at the Empire (later Wembley) Stadium, London on April 23 1924 and at the opening of the Abbey Road Studios, London, on November 12 1931, as well as other home movies of the composer.]
The video also includes various rare films of Elgar. You can see Elgar conducting at the opening of the Abbey Road studios in 1931 [for the whole unedited sound recording of this occasion see the video at the foot of this blog]. Also seen are excerpts from various home movies featuring Elgar, Vera Hockman, his daughter Carice and her Cairn terrier, and his own two dogs Marco (a spaniel) and Mina (a Cairn terrier). Rarer still is the brief movie shown at the beginning of the video, of Elgar conducting at the opening of the British Empire Exhibition in London on 23 April 1924. This was not a happy occasion for Elgar who detested all the jingoistic ceremony and military displays (coming only a few years after the appalling slaughter of the First World War). He was conducting his Pomp and Circumstance March no.1 and his arrangement of Parry's Jerusalem. When he arrived at the rehearsal the choir that was present "cheered the veteran conductor as he mounted the steps" though he seemed a "lonely figure in black poised in his lofty pulpit". Afterwards Elgar wrote to Alice Stuart-Wortley describing the event as having "no soul & no romance & no imagination".

Over the top of the score of the 2nd Symphony Elgar has quoted the first two lines of an 1821 poem by Percy Bysshe Shelley: 'Rarely, rarely, comest thou, Spirit of Delight!' [you can read the full poem below]. The 'Spirit of Delight' theme is presumed to be the first movement's passionate opening E flat theme. It makes a beautiful and hushed re-appearance towards the end of the slow movement (at 12.10 in this video). Knowing of Elgar's constant battle with depression this is a very moving and deeply personal moment. Back in the 1980s I and the composer Lionel Sainsbury were able to spend a whole afternoon with the original manuscript of Elgar's 2nd symphony (unsupervised!) at the Elgar Birthplace Museum in Worcestershire. We didn't tear out any pages (alla Mr Bean, see Mr Bean - Library destruction), but handled it as the precious artefact it is. And just to show that Elgar didn't always take himself so seriously, on the very top of the first page of his manuscript, underneath the 'Rarely, rarely, comest thou, Spirit of Delight!' quote, Elgar had drawn one of his characteristic doodles: a gleeful little man in the form of a treble clef (the 'Spirit of Delight'), cycling along the staves with great panache! 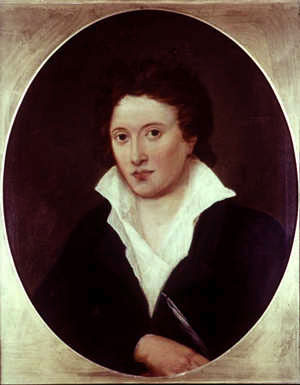 [Portrait of Percy Bysshe Shelley by Amelia Curran, Rome, 1819.]
Rarely, rarely, comest thou,
Spirit of Delight!
Wherefore hast thou left me now
Many a day and night?
Many a weary night and day
'Tis since thou art fled away.

How shall ever one like me
Win thee back again?
With the joyous and the free
Thou wilt scoff at pain.
Spirit false! thou hast forgot
All but those who need thee not.

As a lizard with the shade
Of a trembling leaf,
Thou with sorrow art dismayed;
Even the sighs of grief
Reproach thee, that thou art not near,
And reproach thou wilt not hear.

Let me set my mournful ditty
To a merry measure;
Thou wilt never come for pity,
Thou wilt come for pleasure;
Pity then will cut away
Those cruel wings, and thou wilt stay.

I love all that thou lovest,
Spirit of Delight!
The fresh Earth in new leaves dressed,
And the starry night;
Autumn evening, and the morn
When the golden mists are born.

I love snow, and all the forms
Of the radiant frost;
I love waves, and winds, and storms,
Everything almost
Which is Nature's, and may be
Untainted by man's misery.

I love tranquil solitude,
And such society
As is quiet, wise, and good
Between thee and me
What difference? but thou dost possess
The things I seek, not love them less.

I love Love—though he has wings,
And like light can flee,
But above all other things,
Spirit, I love thee—
Thou art love and life! Oh, come,
Make once more my heart thy home.

Below is a video of Edward Elgar conducting the trio of his Pomp and Circumstance March no.1 at the opening of the Abbey Road Studios, London, on November 12 1931. His words, spoken to the orchestra at the beginning of this short film clip, are as follows: "Good morning gentlemen. Glad to see you all. Very light programme this morning. Please play this tune as though you've never heard it before".