Even Nature is by Art surpassed

For fans of Michelangelo's incomparable art, here is a video of photographic images of his inspiring Pietàs (combined with a synthesized recording of my 'Lament' for string orchestra). Below are a few words on each of Michelangelo's four famous Pietàs.

In the above video is a collection of photographs of the Pietàs and drawings of Michelangelo (1475 - 1564). Michelangelo Buonarroti was the foremost artist of the Italian Renaissance and is regarded today as having without question one of the greatest creative minds of all time. 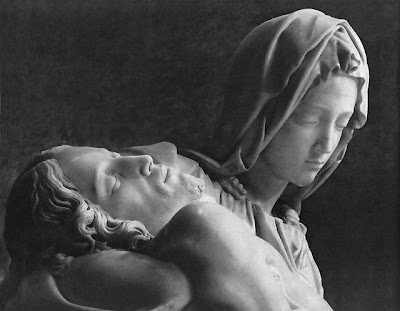 Michelangelo was in his early twenties when he completed his most famous Pietà of St Peter's Rome. According to legend after he had completed the sculpture he overheard someone praising the work as by another artist so returned to the sculpture and carved his name on it - the only work of his on which he carved his name. 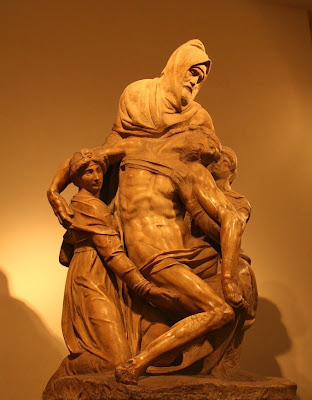 Michelangelo began the Florentine Pietà (also known as 'The Deposition') in his 70s and was originally intending it for his own tomb. Unfortunately the marble he used was faulty, which he didn't realise when he began the sculpture; the stone was very hard to work with and often drew sparks as he chiseled. Finally the left leg of Christ broke off while he was working on it. Michelangelo was so furious he attempted to destroy the whole sculpture, beginning with Christ's left forearm and hand and right forearm, but was prevented by his pupils from completing the destruction. It was later repaired and completed by his pupil Tiberio Calcagni - the inferior quality of Tiberio's work is obvious in the finishing of the figure of Mary Magdalene; fortunately Tiberio Calcagni didn't attempt to 'finish' the remaining figures. The tall figure of Joseph of Arimathea (also credited as Nicodemus) is according to legend supposedly a self portrait of Michelangelo himself. 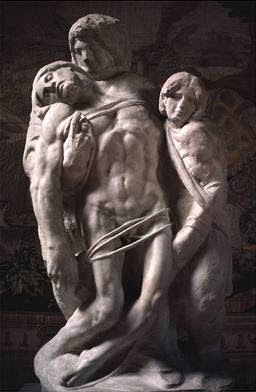 The unfinished Palestrina Pietà has no documented history in Michelangelo's lifetime. However it was added to the Michelangelo collection in Florence in 1939. Most likely Michelangelo began the work, and possibly one or more of his pupils attempted more work on it, though it remained incomplete. 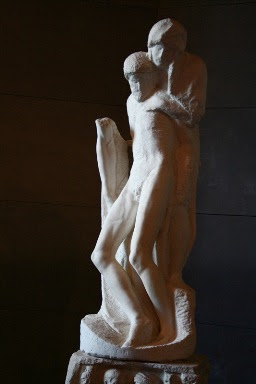 Michelangelo was apparently working on his last Pietà, the unfinished Rondanini Pietà, only days before he died in 1564, at the age of 89. 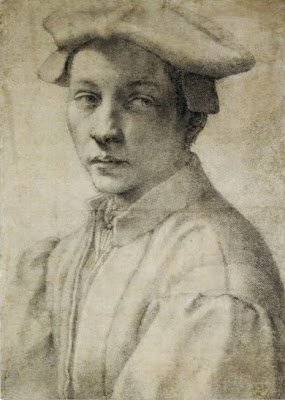 Before his death Michelangelo attempted to have all his drawings burnt, regarding them as inferior work, drawn purely for the purpose of preparation for his sculptures, paintings and architecture projects. Fortunately for us Michelangelo was unable to complete the destruction and many of his beautiful drawings (many done in red chalk) have survived. The above drawing (dating from c.1532) is of Andrea Quaratesi (1512-85), the only known 'portrait drawing' of Michelangelo's to have survived. Andrea Quaratesi was a young Florentine nobleman and possibly a student of Michelangelo as the artist wrote on a drawing now in the Ashmolean Museum in Oxford the words: "Andrea, have patience".
Posted by Jack Gibbons at 5:45 AM

A really nice composition, Jack, intensely lyrical and expressive. Any chance of this and other works of yours being recorded? I have long been a great fan of your Gershwin and Alkan CDs. But I would very much like to see recordings of the Gershwin concert works with you as soloist. Any chance of this?

Thank you for the comments. Sister Kelly, I am delighted you will be showing my tribute to Michelangelo's wonderful Pietas to your art history class - thank you. And Ron, hopefully a long planned recording project of my own music will come to fruition this year. As for recording Gershwin's concert works: a similar project had been in the planning stages many years ago with an English record company, but alas never materialized, but who knows what the future will hold!